5 Creative Techniques To Remove a Broken Key From a Lock 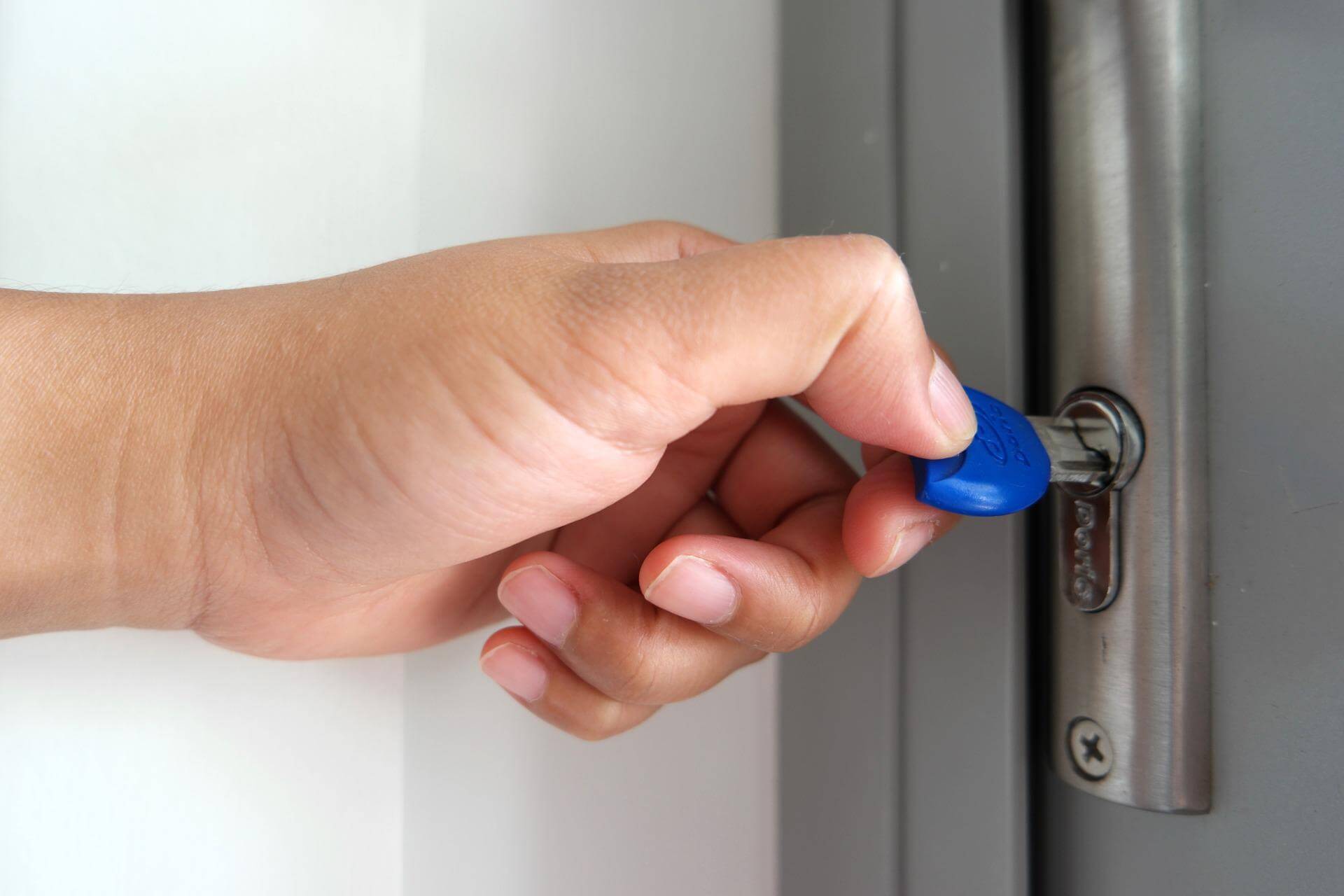 Let’s get started with 5 tried-and-true techniques that utilize a variety of everyday items—many of which you likely have in your home. Before we go any further, it is important to note that removing a damaged key might create more issues if done hastily or incorrectly. So avoid being hasty and cautious while attempting any of the techniques listed below. If you have doubts, a professional locksmith can assist with the broken key and cut you a new key on the spot.

For any of the strategies listed below, you’ll want to minimize as much friction as possible. While this step isn’t required, it can make a significant difference. Spraying a little lubricant into the keyway is the most effective technique to do this. Graphite or Teflon, are ideal in this scenario. If you don’t have any of those on hand, an oil-based lubricant such as WD-40 can suffice in a pinch. Keep in mind that oil-based lubricants will leave behind a residue which will allow dirt and grim to build up over time.

How to Remove a Broken Key

The first and most effective way to remove a broken key from a lock is with a professional tool known as a key extractor. Key extractors come in many different forms, but they are all used similarly. They use something sharp to dig into the damaged section of the key and provide you with extra leverage to pull it out.

Extractors, such as the Peterson hooked key extractor, employ a lock pick-style tool with a barb on the end—similar to a straightened fishing hook. Insert it at the top of the keyway with the barbs facing down. To help dig the barbs into the key, gently raise the handle of the extractor and push down. You might need to rotate the extractor a bit to get the perfect angle. Next, apply pressure to the handle and pull upwards. If done correctly, the barb will grip the key and allow you to pull it out of the lock easily. Alternatively, you may push the barb as far back in the keyway as possible and grasp the tip of the key.

Another option to best extract a broken key is to use a HPC spiral blade key extractor. This extractor utilizes a thin, flexible bar—similar to a screw—with a spiraled thread on it. To utilize such an extractor, insert it between the shattered area of the key and the keyway. Push it in as far as possible and then bend the tool into the key so that the threads dig into the key. Twist the spiral extractor and force the tool against the key at varying angles as you progressively increase pressure. The tool will eventually catch the key and begin to retract it with each revolution of the tool.

If the broken key is sticking out of the lock far enough, you may be able to grip and pull it out with a pair of pliers. However, when doing so, be sure to pull it out slowly. The key could be jagged, which could be how it broke in the first place. Tugging on a jagged key could result in further damage or more broken pieces. If the key is jammed up, you can attempt to free it by gently wiggling it or turning it in both directions.

If the broken section of the key is not sticking out far enough to grab with pliers, you may be able to use tweezers instead. Similar as the pliers, gently give the key a wiggle in several directions to help break it free of any obstacle that may hold it in the lock.

One final note, be very careful not to accidentally push the broken piece of the key further into the lock.

Paperclips are a magical tool that works effectively to extract broken keys—as long as the fractured piece isn’t too tiny, and it isn’t too deep within the keyway. There are two techniques for removing a damaged key with a paperclip. In my experience, thinner paperclips tend to work better and give you a stronger grip on the key.

The first technique is to slip your paperclip under the bottom of the broken key piece and then push it downwards to leverage it into the key.

If there is enough room, you can also insert the paperclip at the top of the keyway to try and grip the first cut on the key.

This process may take a few attempts, but if done correctly, it will slowly retract the key from the lock cut-by-cut.

The second technique is to use two paper clips to grip the key from both sides and manipulate it out.

Additionally, both techniques work far better with lubricant, and if you can pull the key far enough out, you may be able to finish the job with pliers.

One final note, if only a small piece broke off, you’ll need to take caution not to push the key further into the lock.

If the paperclip techinque doesn’t provide enough gripping power and keeps slipping off the key, you may need to use something with a sharper tip. The majority of keys are made of a soft metal, and a sharp knife’s point should easily pierce the side of the key far enough to allow it to be levered out.

However, if you utilize this approach, the critical key piece must be positioned near to the keyway’s edge. If it’s too far in, you won’t be able to get your hands on it.

To begin, take your knife and gently push it into the side of the key – like in the image above. Apply gentle force to stab the key as much as possible, and be very careful not to slip and cut yourself.

Once the knife penetrates the key, apply pressure to the key. If your knife slips, try digging it into various other places on the key, including the bottom.

It may take a few attempts, but if done correctly, the key will retract from the lock cut-by-cut.

If you’re feeling bold, you can also use two knives to penetrate both sides of the key—similar to the paperclip technique above.

Another crafty way to remove a broken key from a lock is by using a fishing hook. This technique is effective if the damaged section of the key is deeper within the lock.

To utilize this technique, start by straightening out the fishing hook with pliers.

After that, insert it into an open area in the keyway with the barb facing perpendicular (90 degrees) to the key and then rotate the hook towards the key.

From there, apply pressure on the top of the broken key while also pushing and rotating the fishing hook. The barb will dig into the key and grip it enough to slowly pull it out!

Removing a broken key isn’t always easy and, if done incorrectly, can cause real damage and a massive headache. Not to mention, expensive.

For example, while removing the key, you may inadvertently push it further into the keyway – making matters worse.

If you’re not the risk-taking type, you may want to consider calling a locksmith first.

Send Us A Message 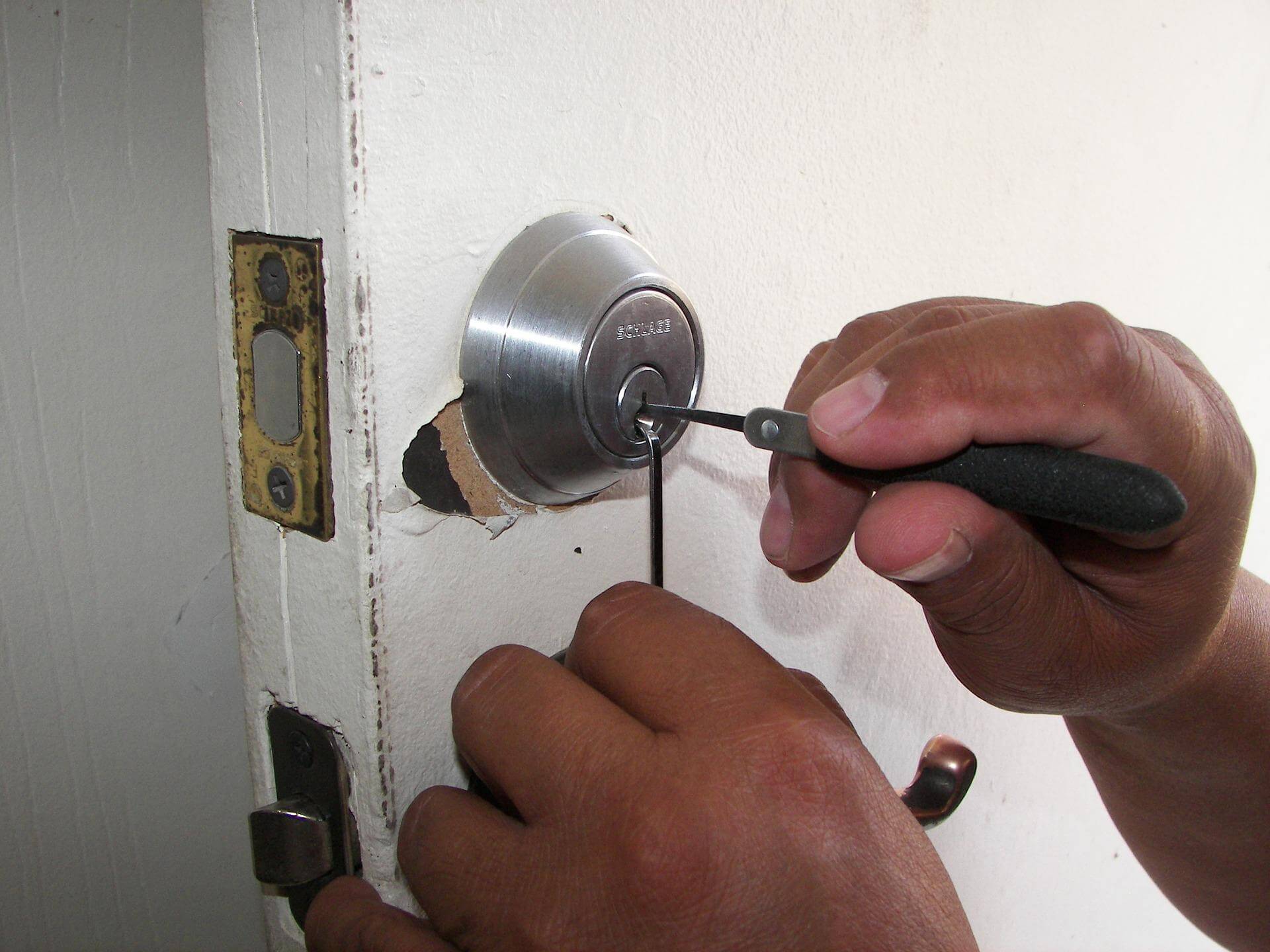 What is Rekeying – 5 Safety Reasons to Rekey

Have you misplaced the key to your home or your key no longer works in the lock? Rekeying can help to eliminate the annoyance of 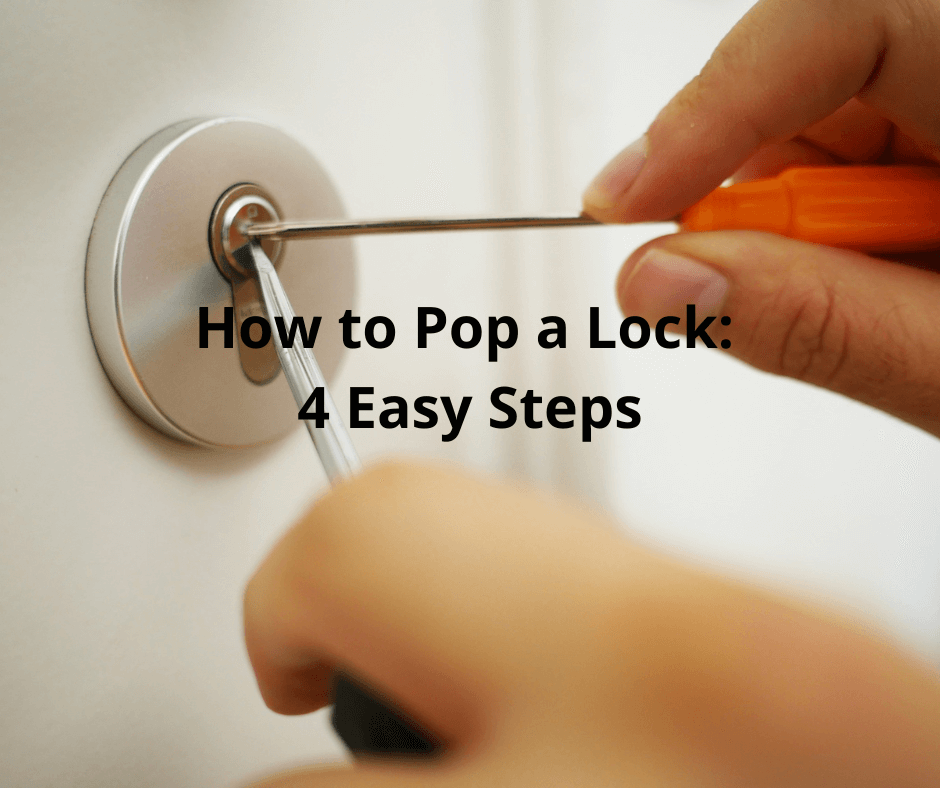 How to Pop a Lock: 4 Easy Steps

Picking locks isn’t a skill people tend to advertise but it’s a handy one to have. Here’s a step-by-step guide on how to pop a lock 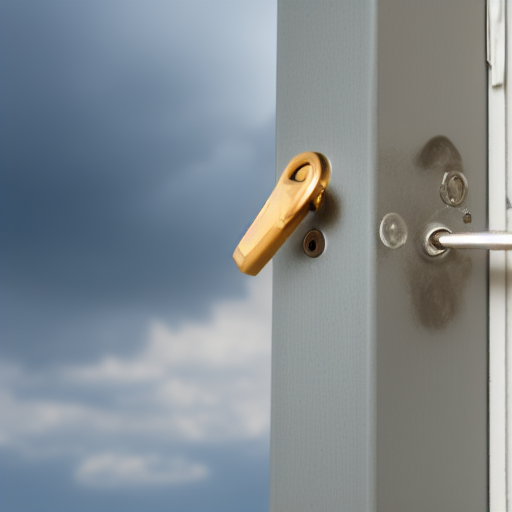 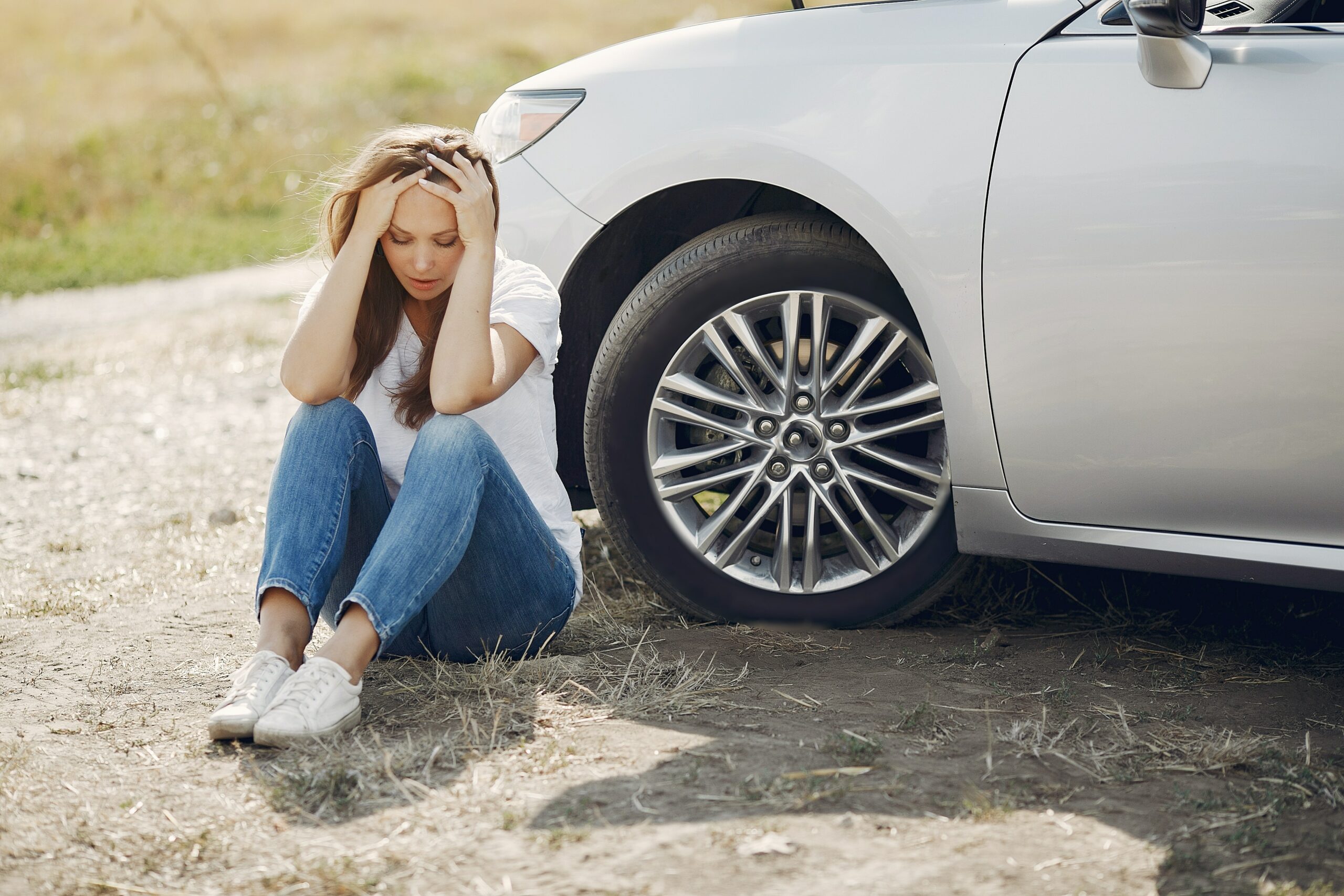 Locked Out? A Locksmith Can Calm Your Frustration

Being locked out of your home, office, or car can cause frustration. Attempting to forcefully gain entry may cause harm to the lock and result